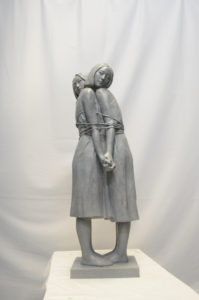 Thanks to our own explorations of China and the friendly relationships we have established with the Chinese art world, our gallery has built up an impressive art portfolio over the years.

In this way we were able to bring a large number of Chinese artists to the attention of the European public. Starting but also established talents that we like to give attention to in Soest.

Since 2000, there has been a growing curiosity from the international community at the astonishing speed of China’s emergence into the world as one of the major players and a potential competitor to the US superpower. This situation will not only allow the international framework to reshape itself, but also make China more uncertain in terms of its social, cultural and political prospects. Thus, the world is shifting its attention to the young Chinese generation born in the early 1980s and growing up with the open and reform program. Their stance will be an important reference to China’s tangible future. As the most sensitive group of this generation, the creation of Chinese young artists is perhaps the parameter for foreseeing the future of China.

In the Chinese art world, one of the most obvious phenomena of the past year has been the coming of age of many young talented Chinese artists whose art practice is rearranging the conventional appreciation and perception dominated by the Western art establishment. This forces international commentators to re-examine the new art without prejudice. They no longer reflect back on the ideologically charged Western projection and imagination of China, but pay full attention to current social reality – to capture the nature of a changing and uncertain life and that contemporary Chinese art is sober.

On our site there are several of this generation of young promising artists such as: Chen Jun, Fang Shi Biao; Liu Yan, Liu Zheng, Na Wei, Zhang Ruo, Zhang Zhaoying and Zhenning Li. Unknown still in Europe but strongly emerging in our own country!

Galerie Kunstbroeders was founded in 2010 by Rijk Schipper who, after living in China for a number of years, wanted to share his passion for the country and art with the European public.